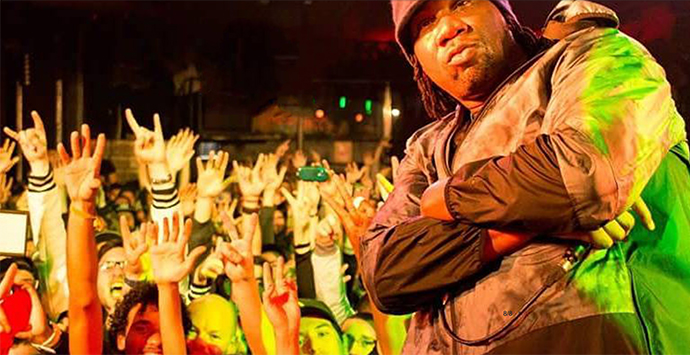 Dj Predator Prime, KRS-One’s son, got the crowd hyped on 05 October 2017 at the Q-Factory in Amsterdam before the actual show doing his thing behind the turntables: Talent obviously runs in the family. So when KRS-One came on stage, the audience, that was already excited, went crazy.

KRS-One, a.k.a. The Teacher started the concert with a big bang: Energetic like a Duracell bunny, he spit bars like his life depended on them and constantly moved from one side of the stage to the other, engaging the whole audience, from left to right, front to back, repeatedly asking whether Hip-Hop was here or rather over here (pointing to one side first and then the other). It was great to see how he also engaged his son in his performance and how both communicated and understood each other non-verbally. In good old KRS-One tradition, he shook his fans’ hands right in the beginning of his concert acknowledging everyone who was able to get his attention. KRS-One delivered the Hits the audience had longed for, but also impressed the crowd with some Freestyles that could not have been any wittier, sharper or more fiery. It would not have been a KRS-One concert without him trying to convey a message to his audience: He emphasized the crucial role of knowledge and how you do not need to be an academic to get access to knowledge. He named school drop-outs now on top of the world, who have made it so far because they found a way to educate themselves.

Another point he made was how technology is killing humanity and how “I” more and more often trumps “we”. When KRS-One asked whether there were any b-boys or b-girls in the audience, some dancers went on stage and started Free-Styling. In the meantime KRS-One stood on one side of the scene and applauded them. Obviously impressed by these male dancers’ skills, he asked whether there were not any female dancers who wanted to show off their skills. That was the moment I overcame my fear and went on stage: How often do you get the chance to be on stage with the Teacher and show off your dance skills in front of an audience like this one; so I went on stage and did my thing next to KRS-One. All fear was gone when I saw him smile at me and I heard the crowd applaud. KRS-One then started signing album covers and took pictures with whoever was able to get through to him. The whole concert turned into an alternative party on stage with the one-and-only KRS-One and his son who was just as down-to-earth as his father and took pictures with fans as well.

KRS-One then left the stage and left a blown-away crowd behind that will talk about his concert for a while: Few are the Hip-Hop artists capable of delivering such a high-energy performance of that caliber packed with meaningful and deep messages that make you question a lot of things in today’s society and allow you to re-focus on what Hip-Hop is really about. //