Some people call me Flash, most call me Grandmaster 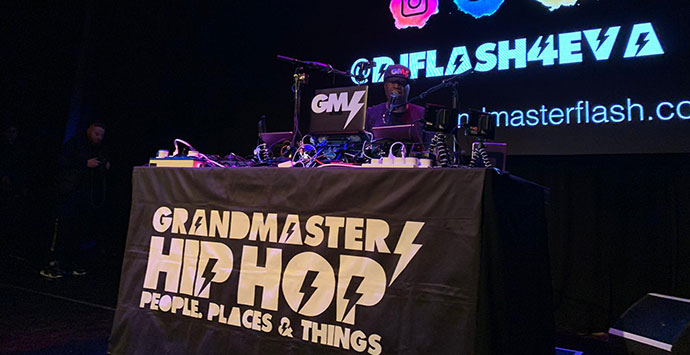 Grandmaster Flash, the recipient of the 2019 Polar Music prize - the music world’s equivalent of the Nobel prize - was burning down the Q-Factory in Amsterdam with a mind-blowing live-set.

Grandmaster Flash is one of the architects of Hip-Hop culture

In the context of his “Hip-Hop, People, Places & Things Tour”, Grandmaster Flash - architect of Hip-Hop culture, living legend, pioneer of turntable techniques, such as scratching and the recipient of the 2019 Polar Music prize - blessed the audience at Q-Factory with a gig on 23 February 2019. Last time I had seen him spin was at Pratersauna in Vienna in 2011. Therefor my expectations were very high. However, let me tell you one thing: If Flash rocked the house back then, he burned it down this time! Everything, from the opening sermon until the very last second of his performance, when he was walking off stage shaking his fans’ hands, was mind-blowing and above and beyond anything I had expected.

No technology, no real studios and no social media

The show started off with a brief video that took the audience on a journey to the Bronx and back to 1971, when Grandmaster Flash became obsessed with turntables and would get his behind kicked regularly for touching his father’s extensive record collection, and 1973, when he started playing turntables like an instrument using his fingers to spin records counterclockwise and extending the short drum solo they used to call the “get down part” back in the days, today commonly know as “the break”. [Recommended reading: Said, A.: The art of sampling: the sampling tradition of Hip Hop/Rap music and copyright law; Superchamp Books, 2015]. The clip also revealed Grandmaster Flash use of lampposts as a means to power his sound system at block parties. The video pointed out that the first DJs (DJ Kool Herc, Afrika Bambaataa and Grandmaster Flash) had no technology, no real studios and no social media when they started off, but they still managed to create great music by just using two turntables and a pile of records.

Explaining the history of his craft

When the video was ending with the sentence “Some people call me Flash, most call me Grandmaster”, Grandmaster Flash entered the stage. The crowd went crazy and welcomed him enthusiastically. As there was a camera set up on his rig that was synced to the screen behind him, the crowd was able to watch him scratch and work his magic on the 1s and 2s in real time while he was explaining the history of his craft.

The next part of the show consisted of a tribute to Aretha Franklin and a homage to some of the most influential Hip Hop artists no longer with us including Big Pun, Heavy D, Fresh Kid Ice, Lisa Left Eye, J Dilla, Big Bank Hank and Scott La Rock, Phife Dawg, Biggie, Prodigy, Old Dirty Bastard, Easy E, MCA, Jam Master Jay, Nate Dogg and Tupac. This was a very touching moment and you could tell Grandmaster Flash was getting a bit emotional while pictures from these late artists were being displayed on the screen behind the turntables.

A tour through the five boroughs of New York City

However, Grandmaster Flash managed to transition smoothly from a nostalgic mood to celebrating these artists’ accomplishments by continuing his musical history master class: He took the audience on a tour through the five boroughs of New York City paying respect to Hip Hop artists representing the Bronx, Queens, Brooklyn, Manhattan or Staten Island. I was very surprised and extremely happy to realize that the teenage boys standing right next to me in a crowd full of older Hip Hop heads knew all of the lyrics to most of these artists’ tracks and went as crazy as I did whenever a new picture of a representative of a borough showed up on the screen and the music changed accordingly. As corny as it may sound, seeing them enjoy themselves as much as I did, made me realize how powerful and timeless Hip Hop is. It also made me aware of the extent of Flash’ legacy which allows to bridge generations and will be carried on.

Finally, Grandmaster Flash went through a rendition of mixing classic tracks involving the crowd through call and response, which got everyone in a block-party mood and made the crowd dance.
Grandmaster did an excellent job providing both knowledge and entertainment at the same time. I just wish he would have played and shouted out female rappers more. Nevertheless, I left the concert walking on clouds - with even greater insight into and respect for Hip Hop culture. //

Text: Qual-E.T.
Pictures: @Shotsbyshali (Instagram, Facebook), for inquiries: Diese E-Mail-Adresse ist vor Spambots geschützt! Zur Anzeige muss JavaScript eingeschaltet sein!
Qual-E.T. with friends and Grandmaster Flash’ technician/crew after the show
Qual-E.T. with Aileen Middel aka Mick La Rock who is a visual artist and curator (graffiti and urban contemporary art) based in Amsterdam, NL who came prepared. She brought all of her Grandmaster Flash records from back in the days to get them signed: a true Hip Hop head.