Enlytened by the Queen of Hip-Hop 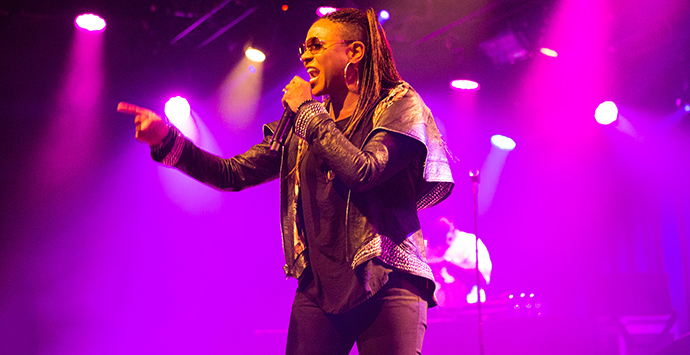 October 3, 2017 was a big and long-awaited day for me: MC Lyte, the Queen of Hip-Hop, was going to perform at Paradiso Noord Tolhuistuin in Amsterdam. I had never been to any of her concerts before and was dying to see her live. I could not believe my luck: I was going to see one of the best femcees and rappers of all time that evening. This female rapper is not only incredibly skilled but was also one of the first to address issues, such as sexism and mysogyny, so wide-spread in Hip-Hop. MC Lyte has also paved the way for many other female rappers, such as Queen Latifah and Missy Elliott, just to name a few.

Needless to say, I was full of anticipation that eve; but I was not the only one: The excitement in the audience - full of Old-School Hip-Hop heads - was palpable. When the moment, we had all been waiting for, finally came and MC Lyte entered the stage, one thing was clear from the very first second on: She has not lost even the tiniest little bit of her fire and appeal. Full of energy, she performed her biggest hits, busted some dance moves and interacted with the audience throughout the whole concert. The icing on the cake were her freestyles: She spit bars like there was no tomorrow, blowing the crowd away with her husky voice, her unbelievable flow, her wit, plays on words and cunning references. She integrated her more recent music very well into her repertoire without losing the audience's attention, who undoubtedly had come to hear her big joints from back in the days. What knocked me off my socks most, however, was the passion with which she performed and the enthusiasm with which she referred to Hip-Hop culture and its major players, pioneers, architects and legends. I especially liked how ego-free and humble she was as she brought up and paid tribute to other very influential rappers and femcees by citing some of their lines.

In summary, I was amazed by MC Lyte's charisma and stage persona. I was blown away by her unbelievable talent as a rapper and entertainer. I loved how smoothly she combined her new music with her older tracks and how she was able to keep up the excitement of the audience throughout the whole concert. To me this show was a concert I will never forget as MC Lyte did not just deliver a performance but created an unique Hip-Hop experience for the audience. If you had not known what Hip-Hop really is before, now you knew for sure. //