Aftersun with lots of emotional memory 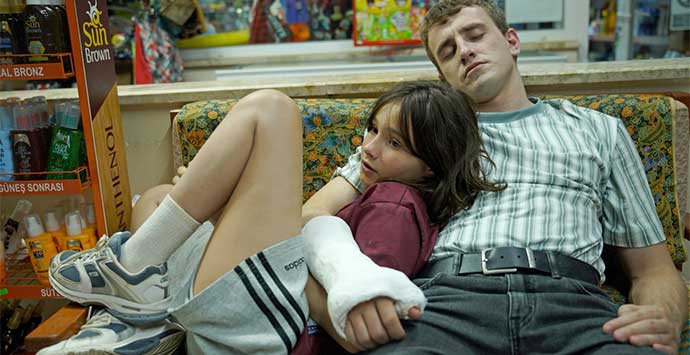 The Aftersun film premiere and discussion with film director Charlotte Wells took a poetic look into a father-daughter relationship.

"Aftersun" is a poetic look into a father-daughter relationship and the changes that occur through trying to remember and crossing over to the next stage. Adjusting one's perspective while lingering on what was or will soon have been a known reality.

Walking into Stadtkino I was not prepared for the emotional memory that sits inside our body, to hit me as true and tangible as it did through Charlotte Wells' beautiful imagery and storytelling. Initially I was looking forward to the opportunity to share a virtual room with a young female director, who is daring enough to create with "Aftersun" a more mosaic-like than strictly narrative film as her feature debut. Her presence and her beautiful movie took me off guard.

In the closeness of a relationship

It is an in-between state, a moment in life that seems to last forever, before one crosses over to the other side of childhood. Rewinding the tape to reimagine a life lived from a kinder, more gentle perspective as "Aftersun" goes on to tackle topics of loneliness, memory, distance and adolescence with a sense of grief. In the center of it all, a young father (Paul Mescal) and his daughter Sophie (Frankie Corio) at a Turkish holiday resort, growing apart in retrospect while living comfortably in the closeness of their relationship.

Grounded somewhere in the early 90s

The relationship between the two is an anchor that is being lifted in both their lives as the daughter finds herself growing out of her childlike being and with that enables herself to glimpse into her fathers life from an unfamiliar distance. The movie is unfolding in its own rhythm - very slowly at times, with lots of emotional memory grounded somewhere in the early 90s. The sound design creates a wave of its own and supports the film in being an event that needs to be experienced rather than a narrative that can be understood.

Who are parents before we get to be with them?   Who are we because of them?

What the movie does with all the tapes and recordings and rewinding of events is digging into the viewers own memory. Asking the question of what happens when we get some distance between us and those carefully selected and tucked away memories of ours. How do they change when looking from a different perspective?  With that I believe it allows itself to weave though and into  so many very individually lived and relived experiences away from a strictly diegetically spun storylines.

To touch on the discussion that happened after the screening - Charlotte had a kindness and an ease to her that lightened the whole room. She opened up about technical difficulties of being able to get dailies developed - due to the choice of film and having to go through a lab in Romania - to how grief and her own memories have inspired Aftersuns narrative. About happy accidents, good preparation and the confidence to trust in the people you work with. //